That’s right. After 20 years with Burton, Kelly Clark, the most winningest athlete in snowboarding history, is stepping away from the competition circuit. True to form, she’s bowing out with grace, humility, and her eyes set on the future.

“The next generation will take halfpipe snowboarding further than I ever could,” she says. “Today, I step away from competitive riding knowing that women’s snowboarding is alive and well, and in good hands.”

A quick glance at her accomplishments reveals three Olympic medals, eight Burton U.S. Open Championships, the founding of her nonprofit: the Kelly Clark Foundation, her new book: Inspired, and now the development of a new snowboard, the Rise, designed in collaboration with Burton CEO Donna Carpenter.

This is a special moment for a rider who has dedicated everything, both mentally and physically, to progression. We figured the best way to tell the world would be to let her put it in her own words. 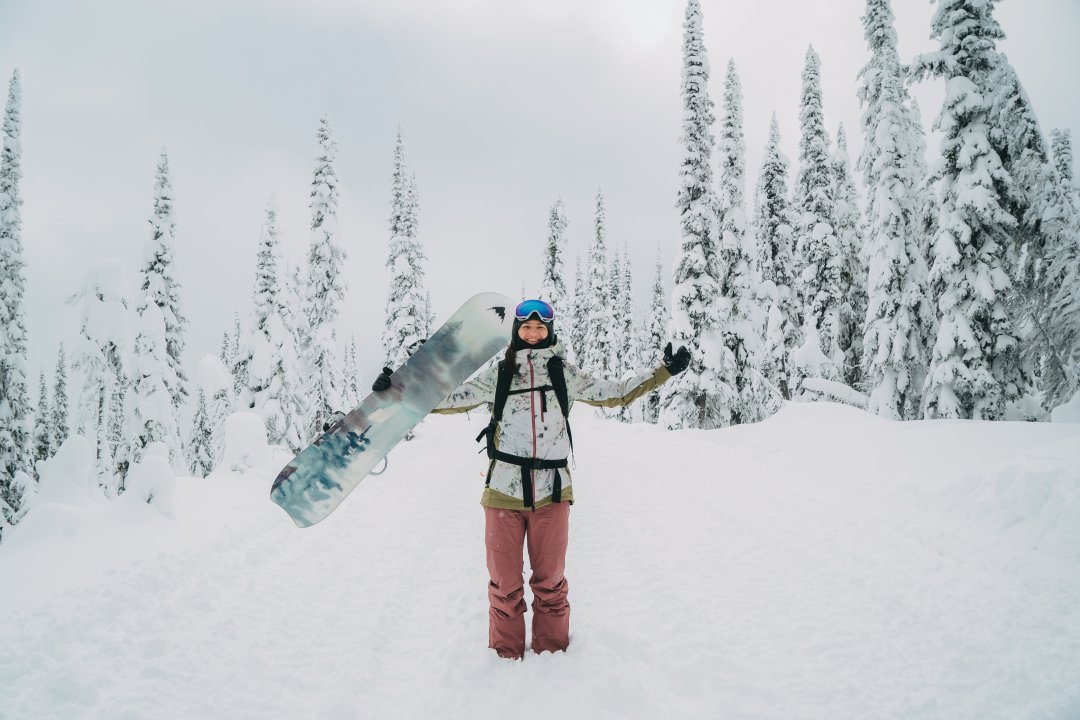 Has it really been 20 years? What stands out when you look back on your journey through snowboarding?

Well, a lot of people don’t realize that there wasn’t a lot of opportunity for women when I was getting started, and wanted to be a professional snowboarder. The most surefire way to make it as a pro snowboarder was through competition. It’s like, “Okay, this is it, I gotta make sure I can perform under pressure – that’s my only chance.”

I started on the US Team in ‘98/’99. I was on the B-team, which means you pay part of your way, but get some support. The first event I competed in with the team was a Grand Prix at Okemo, and both Gretchen Bleiler and I podiumed. They bumped us up to the A-team right away after that, which meant all our travel was funded. I couldn’t afford to travel and compete at the time. So, that was a big moment, like, “Oh my gosh, I’m gonna get to do this. My dream is a reality.”

I have to include 2002 as one of the highlights of my career. I was deferring from college, and if I didn’t do well that year I was going to go to college. It was really do or die, like, this is your one shot, and if it doesn’t work out, University of Rhode Island, here I come!

I got 7th and 9th in the first Olympic qualifiers. I tore my meniscus over Christmas break. I basically had three Olympic qualifiers left to see if I could somehow land a spot on the Olympic team. I started landing McTwists at the Mt. Bachelor qualifier event, and then at the next two, and all of the sudden I was on the US Team. I then went to the X Games and won by 12 points. I won the Olympics right after that. And on the tail end of that whirlwind I won the Burton U.S. Open halfpipe.

So, that whole year was crazy. I remember, right after I won the Olympics, I found my parents in the stands, and the first words I said to my dad were, “Does this mean I don’t have to go to school?”

We’re so glad the answer was no! What about more recently?

The last trip to Baldface Lodge that we did for this video was also a big moment for me. Those girls, Anne Molin and Shannon Dunn Downing, shaped my snowboarding. They’re the girls who I emulated, and they really showed me what was possible. Anne was the first to do a frontside 900 ever in a halfpipe, and she went bigger than everybody. It made things possible, watching them. So it really felt like coming full circle, being up there with them.

Speaking of coming full circle, how is your role with Burton evolving? What are you focusing on?

There’s been a huge initiative at Burton, as leaders in the industry, to lead on the sustainability front. As riders, we’re very much involved in the product development side of things. As we’re in the product development meetings, sustainability is on the forefront. It’s a huge core value of ours, so we’re integrating it into as many products as possible.

My world was consumed with competition. The amount of space it took up in my brain was just ridiculous, and I had to say no to a lot of things. Now I can hear about what’s going on and actually apply myself, get out there, design new snowboards, and test new product. There’s a lot of ways to get involved, but having the time and the bandwidth to apply myself to it has been really enjoyable.

Tell us about this new board you’ve been working on with Donna Carpenter, the Rise.

With Jake’s new Mine77 line coming out this year, he tasked Donna with developing the most sustainable snowboard ever, and that’s when my phone rang. Donna said, “Hey, I have to design a board. Let’s do this together.”

It’s one of the most sustainable boards Burton's ever produced. It’s basically a snapshot into our new standards for the 2020 line. It’s a pow board, called the Rise. Because of the carbon footprint, and the limited run of 50 boards that we made at Craig’s, with the energy practices in that facility, the carbon footprint is almost negative. It’s really cool to be able to use technology and forward-thinking to integrate our core values as individuals, and as a company, into everything we make.

I rode it at Baldface Lodge for three days, and I never once wished that I had a different board. I was like oh, I can do everything on this thing! I think Donna’s exact words were, “I’m never riding another board, you’re going to have to pry it from my fingers.”

So, what do you aim to get into now that you are leaving the competitive realm?

Like I’ve said: competition has been all consuming. So now that I have time, I am excited to spin my wheels in a few different areas and see where else my snowboarding can develop and be challenged.

As far as my snowboarding goes, I know that I always want to be learning and progressing. That’s in my DNA, it is very important to me and I thrive when I am challenged and progressing. Whether that’s in a different aspect of the sport…in powder and backcountry in elements like that…I hope to grow and develop that side of my snowboarding. I don’t think I’m going to crank out some film project in a traditional sense, but I know I am going to continue to grow and get better at snowboarding. That’s just how I’m wired.

Beyond that, I am looking to develop my book, my writing, and my speaking in the years to come. I think I will continue to develop that while I continue to snowboard and be a part of what Burton is doing globally with sustainability and the product side. I’ll continue to grow and develop in that area with the brand.

Yeah, there's no shortage of things to keep me busy, that’s for sure. It’s fun, I get to just explore and develop as a person, an athlete, as a snowboarder beyond competition, and beyond knowing what’s on my calendar for the next 4 years as I head into the Olympics. That’s been my whole life, so it’s nice to have a bit of freedom and a bit of creativity, I think that’s kind of at the core of snowboarding. I think that’s why we all do it, there is a lot of freedom and a lot of creativity that we get to experience. So, I am looking forward to seeing what this next chapter holds.